MPAR was almost four weeks ago but I still have to write about it. Hands down the best weekend in the MBA program so far. To say we had fun would be an understatement.

For those who don’t already know, MPAR stands for Mid-Program Academic Retreat, a second year event set up at the mid-point of the three-year EWMBA program. This was an opportunity for the Class of 2012 to get together again for a weekend of fun, learning and networking at Seascape resort in Santa Cruz (the last time we met in a similar setting was during orientation). The learning part comes from having to compete against our fellow classmates in a strategic simulation during which we are expected to make a number of executive decisions for a company. The decisions impact how well our company does against others in our industry. We get to strategize and course-correct if necessary over a total of six rounds. The best run company at the end of Round 6 is the winner. The whole class was divided into eight industries and each industry consisted of six companies. Each company was made up of a team of 4-5 students randomly assigned at the beginning of the simulation. Competition was absolutely FIERCE! (Can you expect anything less when a bunch of MBAs are competing?) It was super-exciting to watch how we did after each round and adjust our strategy accordingly.

Friday, Jan 14th was when it all started. A day of information overload. We checked into the hotel, got an overview of the simulation and got to meet our assigned team members. We were briefed on all the decisions we were expected to make. As we tried to make sense of the tons of data provided to us we were also learning to work with our team members. Instantly we developed empathy for all the execs out there – how do they manage to parse through the enormous amount of data thrown their way and make informed decisions when the company’s future is at stake? On the first day we completed two rounds of simulation before breaking for dinner.

After dinner, each cohort grouped together for an activity of their choice for team-bonding. My cohort (Axe) got together in one of the conference rooms to take a group picture after which folks started sharing the most memorable moments of their MBA life. What followed has been popularly dubbed as ‘The Axe Lovefest’ with the entire cohort sharing the most fun, memorable, cherished or even embarrassing moments of the past year and a half. We concluded by agreeing that – AXE ROCKS (Yea it does!).
And then the partying began. Prof. Shultz accurately predicted that morning that the class of 2012 was going to party like it was their last chance to act like undergrads. And party like undergrads we did!

Saturday morning 9AM sharp – everyone is back working on the simulation with their teams. Two more rounds of simulation amid lectures. The rounds got shorter as they progressed which meant we had to make our decisions a lot quicker as rounds went by. In the evening, we had dinner followed by bonfire on the beach. 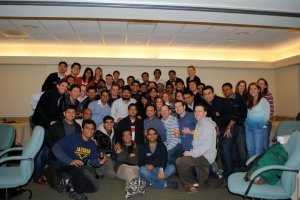 Then some more partying.

Sunday morning 9AM sharp – everyone is back again with their teams for the final two rounds of the simulation. It was incredible to watch how diligently my fellow Haasies followed the ‘work hard party harder but then get back to work on time’ rule. The Industry winners were announced just before MPAR came to an end at noon. The icing on the cake was my team winning in our industry (yessss!).

It’s safe to say that by Sunday afternoon the whole class was horribly sleep deprived. However, no complaints. MPAR was awesome. An experience we will remember forever – right, Class?

My only regret – that it’s over.